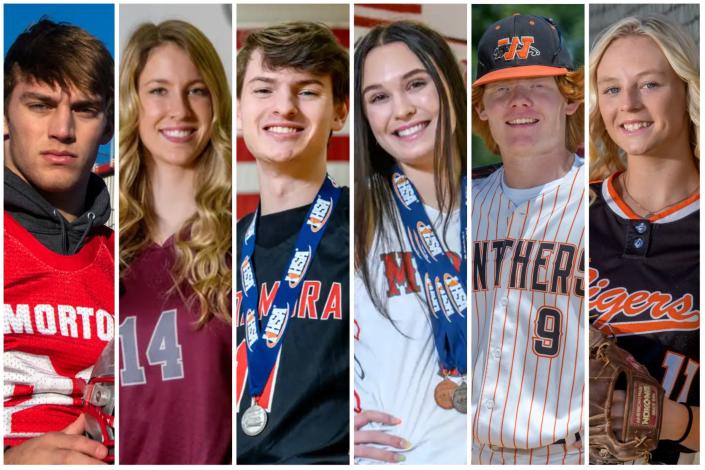 The 2021-22 Peoria Journal Star high school sports season officially ended this week with the crowning of the final spring all-area teams and players of the year.

From all-conference picks to all-staters to state champs — here are each of the Peoria-area players of the year, along with links to our stories and all-area team lists for each of the 19 Illinois High School Association sports for which we choose teams.

FOOTBALL PLAYER OF THE YEAR: The 5-foot-11, 188-pound senior running back rushed for 3,246 yards on 373 carries and 46 touchdowns along with a kickoff return TD. Glatz averaged 249.7 yards a game and 8.7 yards a carry, while leading the Potters (10-3) to the Class 5A semifinals for the first time in program history and shared the Mid-Illini Conference championship. His individual accolades include all-Mid-Illini Conference first-team offense, first-team Illinois High School Football Coaches Association all-state and IHSFCA academic all-state. He will attend Western Illinois to play football.

VOLLEYBALL PLAYER OF THE YEAR: The Purdue-bound 6-foot-1 all-state outside hitter led the Grey Ghosts to their first Class 2A Elite Eight in a dozen years. The two-time POY recorded 526 kills, 237, 62 aces and 51.5 blocks for IVC, which finished 30-8 after losing to the eventual 2A third-place finisher Palos Heights Chicago Christian. Wollard’s career kill total stands at 1,137, meaning she needs 374 to set the area’s all-time record held by former POY and 2017 Limestone grad Brittany Robinson (1,510).

BOYS CROSS COUNTRY RUNNER OF THE YEAR: The 2021 runner of the year ended his career with a second-place finish at the Class 2A state meet, clocking in at 14:36.4. Georges won eight races during his senior season including the Mid-Illini Conference Championships title, the Galesburg Regional, Metamora Sectional and the First to the Finish Invitational. He has signed to run at the University of Colorado.

GIRLS CROSS COUNTRY RUNNER OF THE YEAR: The 2021 runner of the year ended her career by helping the Hornets take home a third-place trophy with her fourth-place finish at the Class 1A state meeting, clocking in at 17:47.4. Perry won six races during her senior season including the Heart of Illinois Conference championship, the Eureka Regional, the Metamora Early (Red)Bird and the Elmwood Invitational. She has signed to run at Bradley University.

BOYS GOLFER OF THE YEAR: The Bradley-bound senior was fourth statewide in the Class 2A state finals, the highest individual place in program history. He shot a 2-under-par 69 in the final round including a 2-under 33 with five birdies on the back nine at Weibring Golf Club in Normal. Overall, he took medalist honors 11 times including seven invitationals. He was the Prairieland Conference Tournament champion as well as a Class 2A regional medalist. His 9-hole average was 37.6, while Hamm put his name in the school record book with a 70.81 average for 18 holes.

GIRLS GOLFER OF THE YEAR: The first four-time winner of this award in Journal Star history. The Bradley recruit wrapped up her season fourth place in the Class 1A state finals. She shot a final round 2-under-par 70, making four birdies along the way. Pacocha won the state championship in 2019 and was third as a freshman.

BOYS SOCCER PLAYER OF THE YEAR: The junior forward scored 48 goals and added seven assists, including goals in 20 of his 24 games. Nine of his goals came during four games against teams that were No. 1 seeds in their sectionals. He earned IHSSCA all-sectional honors — listed No. 1 on 17 of 19 coaches’ ballots. He also earned IHSSCA all-state honors, all-Midwest region honors.

GIRLS SWIMMING AND DIVING ATHLETE OF THE YEAR: The junior was a four-event state qualifier including the 100-yard backstroke and three relays: the 200-yard medley, 200-yard freestyle and 400-yard freestyle. McCall, the sectional winner in those quartet of events, helped the Eagles capture the East Moline Sectional. She and the 400-yard free team of Kaylee Dexter, Ally Unruh and Ava Salverson were 17th in prelims at 3:38.85 — the highest finish among area swimmers. She also swam the 100 back in 1:00.05 for 33rd in the prelims.

GIRLS TENNIS PLAYER OF THE YEAR: The sophomore singles ace earned second-team all-state honors and didn’t lose to a singles opponent in Class 1A during the regular-season. She went 25-7 in singles play and 34-9 with doubles included. At state, she finished in the top 12 and lost to eventual second-place finisher Emma Davis while leading Richwoods to a seventh-place tie as a team.

GIRLS BASKETBALL PLAYER OF THE YEAR: The Harvard-bound senior ended her career by leading Morton to a Class 3A third-place finish. The 6-foot-1 forward averaged 17.7 points, 8.1 rebounds and 3.4 assists for the Potters (29-6), who were Mid-Illini Conference co-champions. Her individual accolades include first-team all-state by The Associated Press and Illinois Basketball Coaches Association along with all-Mid-Illini first team.

WRESTLER OF THE YEAR: Webster ended his junior season by winning the Class 2A 132-pound state championship. His 24-9 tech fall over Mascoutah’s Santino Robinson gave Webster (48-1) a second IHSA title. The Illinois commit — the top-ranked 2A 132-pound wrestler by the Illinois Wrestling Coaches and Officials Association — heads into the final year of his prep campaign with a 112-2 career record.

BOYS SWIMMER OF THE YEAR: The senior capped his high school career with a pair of state consolation final medals. Smith finished eighth in the 50-yard freestyle, clocking in at 20.93 seconds. He added a ninth-place medal in the 100-yard freestyle in 46.61 seconds. The senior, who won both the 50 and 100 at sectionals, will continue his career at Florida Atlantic.

BASEBALL PLAYER OF THE YEAR: The senior and two-time POY led the Panthers to a 35-6 record and back to the Class 3A state finals, where they finished third. The Bradley-bound all-state pitcher and shortstop finished with a .467 batting average, 56 hits, 10 doubles, nine triples, six home runs and 43 RBIs. On the mound, he was 11-0 with a 0.89 ERA, 122 strikeouts and 27 walks. His individual accolades include first-team all-state by the Illinois High School Baseball Coaches Association along with Mid-Illini Conference first-team.

SOFTBALL PLAYER OF THE YEAR: The Bradley-bound senior took a no-hitter into the final inning of the championship game, eventually earning a one-hit 1-0 complete-game victory over Casey-Westfield in nine innings to earn the Tigers their second consecutive Class 1A state championship. McCoy finished with a 12-2 record with a 1.29 ERA, 141 strikeouts and 21 walks this season. She also batted .527 with 39 hits, 15 doubles, four triples, five home runs, 17 RBIs and a team-high 37 runs. The repeat all-area pick also was named first-team all-state by the Illinois Coaches Association.

BOYS TRACK AND FIELD ATHLETE OF THE YEAR: The all-state senior finished his high school career with a long-coveted Class 2A state title, taking the 1600 in a state-record 4:08.58 in one of the most dominating races ever seen. He won the 1600 in the Mid-Illini Conference and Class 2A Metamora Sectional meets. He also won the 3200 in the Mid-Illini Sectional, but did not run it in the sectional as he wanted to focus on the 1600 at state. He helped Limestone’s 4×400 relay team to fourth at state, and earlier in the month anchored the 4×800 relay team to a Mid-Illini Conference Championships win.

GIRLS TRACK AND FIELD ATHLETE OF THE YEAR: The junior saved her best for last, with three top-four finishes at the Class 1A state finals including Tremont’s first individual state champ since 2014. The versatile hurdler and sprinter won the 300-meter hurdles in a personal-best 44.43 seconds. Geyer, a repeat all-area pick, also ran a career-best of 14.62 in the 100 hurdles state prelims on the way to an eventual silver medal. Her 26.06 personal-best in the 200 was good for fourth place. Her hurdles times are both among the top nine statewide, regardless of class.

GIRLS SOCCER PLAYER OF THE YEAR: The senior attacking center midfielder provided goalscoring, leadership and experience to help the team deliver the best season in school history. The Illinois State signee scored 21 goals, added seven assists, and scored a hat trick in the second half of a 3-2 sectional showdown win against Notre Dame. The first in Dunlap history to be named to the United Soccer Coaches All-Regional Team. She earned Illinois High School Soccer Coaches Association All-Sectional first-team honors and all-state honors.

BOYS TENNIS PLAYER OF THE YEAR: The tall freshman burst onto the high school tennis scene and ripped through area competition with a 26-10 record and a terrific showing at state. He won the Class 1A Dunlap Sectional, battling past Notre Dame senior Scott Anderson in the title match, 6-5, 6-4. He went on to the state tournament and played five rounds deep to reach the consolation championship and finish fifth in Class 1A, an effort that earned him first-team IHSA all-state honors.