With tournament favorites USA off to a winning start on Monday in Group A, fellow title hopefuls Canada takes the field for the first time in the CONCACAF W Championship.

The first opponent in Group B play is Trinidad & Tobago, whose 1993 runner-up finish still serves as the country’s best result in this event.

Les Rouges hope for a positive start to match the U.S. who brushed aside Haiti 3-0 a day ago. That result earned three points but also left many unanswered questions, serving to boost Canada’s hopes of upsetting the No. 1-ranked team in the world in the semifinals or final.

Still, Olympic champions Canada have doubts of their own after a pair of draws against Nigeria and South Korea in warm-up friendlies through the spring and early summer. The most recent result, a 0-0 draw with the Koreans, leaves Canada questioning its ability to score against well-structured opponents.

Sporting News will be following the match live and providing score updates, commentary and highlights as they happen.

46th min: Under way for the second half. No substitutions for either side. Trinidad & Tobago will be happy to be down just one goal, but the lack of any attacking effort at all is concerning and will require changes from Kenwyne Jones at some point.

Just the one Christine Sinclair goal for Canada, but it could have been many, many more. Nearly the entire first half was played in the Trinidad & Tobago half, and Canada missed a number of opportunities in front of net, including Fleming’s missed penalty.

Six saves for Kimika Forbes a big reason why Canada only has the one goal.

CWNT: Christine Sinclair has now scored in 6 Olympic cycles if you include qualifying tournaments.

45+2 min: After a stunning bit of one-touch buildup, Janine Beckie has a tap-in goal, but she’s offside on the feed from Sinclair. The feed came from an offside position, so Beckie just had to keep herself behind the ball, but she couldn’t manage it.

45+1 min: Forbes makes another fabulous save tipping a strike from Rose who hit a cracking volley. The shot may have been headed just over the bar, but Forbes had to make sure there was no danger, and did so in athletic fashion.

Deanne Rose almost just had the goal of the tournament so far for Canada. 😱

38th min: Moments ago, a soft penalty shout went to the monitor and was given. So of course, this time, Canada sees a stonewall penalty waved away by both the referee and VAR. Janine Beckie is clearly tripped by Swift, with the Canadian’s foot clattered by the foot of her defender. No penalty, and very little consistency.

A few second later, Rhea Belgrave picks up a harsh yellow card for catching an opponent on the shin.

35th min: Chance, Canada! Just moments after the missed penalty, Canada goes right back on the attack, and it’s another massive save from Forbes! The Trinidad & Tobago goalkeeper comes charging out to smother Sinclair who had broken away from the defensive line. Fleming nearly pounced on the rebound, but she whiffs again moments after the penalty miss.

WHAT A SAVE FROM TRINIDAD & TOBAGO’S KIMIKA FORBES. 🇹🇹 pic.twitter.com/faLqTbkNnz

34th min: PENALTY MISSED! Ball doesn’t lie! Jessie Fleming steps up to take, and sails the effort over the top-left corner. It’s a let-off for the Soca Princesses, but a deserved one.

Canada have an opportunity to make it 2-0 after VAR gives them a penalty but Jessie Fleming skies it. 😬 pic.twitter.com/clkvdj1MsP

32nd min: Well, so much for that. The Mexican head official has gone to the monitor to look at the tackle on Sinclair. She feels pressure from a pair of Trinidad & Tobago defenders, but there’s hardly any real contact on Sinclair. This would be a weak penalty if given…

PENALTY GIVEN TO CANADA! The official returns to the monitor and points to the spot with EXTREME enthusiasm. There’s very little in that, and it’s harsh on Trinidad & Tobago.

29th min: Canada right back onto the attack and Sinclair goes down in the six-yard box. Her initial effort was blocked on the line, and attempting the second effort she went down under dual pressure. Janine Beckie also ended up on the deck while looking to latch onto the rebound. There’s a hydration break while the trainers tend to multiple players in the box.

There is VAR available for the tournament, but it didn’t seem that any of the defensive pressure produced enough contact to warrant a review.

27th min: GOAL, Canada! After coming close a few minutes earlier, Christine Sinclair has her 190th international goal! A cross from Rose down the left nearly on the end line was placed perfectly onto Sinclair’s head, and the all-time international goalscoring leader didn’t miss. That’s the wide service that was requested, and it paid immediate dividends.

24th min: Chance, Canada! Yet another opportunity goes by the wayside as Janine Beckie takes aim from a tight angle. It was a crossing situation but she had a go and forced a fabulous save from Kimika Forbes who leaps to tip it over the bar.

Beckie is a dangerous force from out wide, but she may be better served tonight in a service role glued to the flank opposite Rose.

This game is screaming service from wide areas. #CANWNT

would love to see Canada drop with three in the back and move Beckie into a wing back roll.

23rd min: Sustained pressure by Canada. This is clear domination over the first quarter of the match, but still nothing to show for it for the favorites. Can Trinidad & Tobago make them pay for their inability to finish? Or is it simply a matter of time?

16th min: Chance, Canada! Christine Sinclair off the post! Rose absolutely roasts the right flank of the Trinidad & Tobago defense and the ball falls to Sinclair via Beckie above the penalty spot. Her pinpoint effort just clatters off the right post and deflects wide. The closest Canada has come through the opening frame of the match.

13th min: Excellent ball movement in the penalty area works Canada another chance, but great last-ditch marking from Trinidad cuts down the eventual shot on the doorstep. Still no score, but Canada is pushing for the opener.

So far as expected for the #CanWNT/#CanXNT – they have a lot of the ball, and are trying to break down T&T

They’re showing flashes, but are still figuring out how to unlock that defence. Just need a bit of patience in the right moments, and a lot more movement

7th min: Canada continuing to ask the early questions, and Sinclair gets off a long-distance shot from a central position, but it’s weak and deflected, and Forbes has it easily in her grasp.

4th min: Canada has the early initiative and it’s Rose down the left with the cross for Janine Beckie who can’t get her header on frame. A big chance for Canada early on, as expected.

1st min: We are under way in Mexico! A Mexican refereeing crew taking charge as these two teams get their tournament started.

14 mins to kick: A fun bit of history for the Soca Princesses as they begin their 2022 CONCACAF W Championship final journey in Group B.

The only team that has played every edition of #CWC.

40 mins to kick: Lineups are out and the world’s all-time goals record-holder Christine Sinclair is starting.

Your starting XI v. 🇹🇹 Trinidad and Tobago for our first match of the @ConcacafW Championship! #CANWNT #WeCAN pic.twitter.com/ahkuFwCE7C

90 mins to kick: Canadian soccer broadcaster OneSoccer has a video guide to follow the upcoming match:

120 mins to kick: A few days ago the Canadian women’s team was deep in a game of tic-tac-toe during training as the team gets match fit for the first competitive 90 minutes of the summer.

The strike combo of Janine Beckie and Jordyn Huitema didn’t produce goals against South Korea, and it’s Huitema hitting the bench in favor of legend Christine Sinclair. With Adriana Leon starting and playing 74 goalless minutes against South Korea, Priestman has opted for Deanne Rose in that wide spot.

Jayde Riviere and Ashley Lawrence started at full-back against South Korea, and both are deployed once again with Vanessa Gilles and Kadeisha Buchanan tabbed for central defense. Riviere in particular has become a favorite of head coach Bev Priestman, with 30 caps at just 21 years old.

Priestman decided to call in Deanne Rose on the wing opposite Beckie, selecting the 23-year-old over the likes of Adriana Leon and Nichelle Prince.

Trinidad & Tobago picked up qualifying wins over Nicaragua, Dominica, and Turks & Caicos to reach the group stage of the CONCACAF W Championship, plus a draw with Guyana sprinkled in.

The attack is not the issue for Trinidad & Tobago, who registered multiple goals in all four qualifying matches, including a 13-0 domination of Turks & Caicos (who, to be fair, finished the qualifying round with a -46 goal differential in four matches). Asha James picked up goals against Nicaragua, Dominica, and Guyana.

Where the Soca Princesses struggle most is at the back, where finding an effective partner for Club Leon center-back Victoria Swift has been a challenge. Rhea Belgrave, 30, has been deployed of late and is back in action.

How to watch Canada vs. Trinidad & Tobago

USA: The CONCACAF W Championship match will be streamed on Paramount+ (English) and ViX (Spanish).

CANADA: The Canada women’s soccer match will be carried by OneSoccer, which is streamed on fuboTV.

Canada may have plenty of kinks to work out, but Trinidad & Tobago are not considered a threat to upset Les Rouges in their opening match.

The odds are heavily skewed in Canada’s favor, with Trinidad & Tobago a near +3,500 underdog. Canada will want to put forth the solid attacking performance expected by oddsmakers to wipe away any concerns generated by the tuneup friendlies. 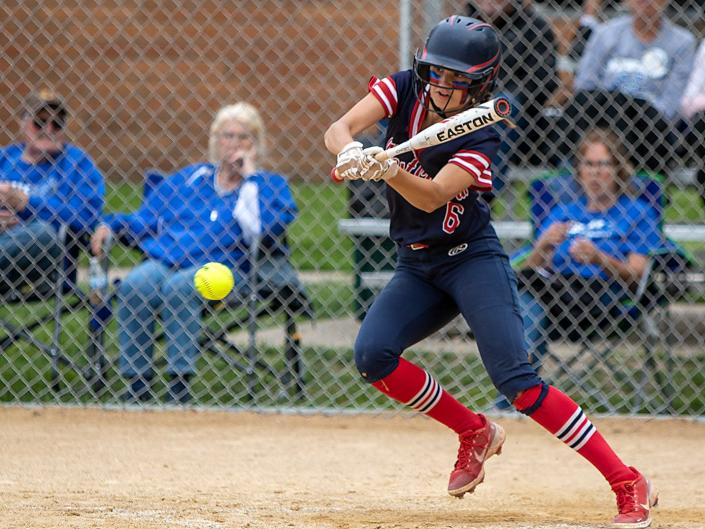